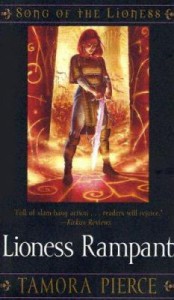 Lioness Rampant is the fourth book in the Song of the Lioness Quartet and the conclusion to Alanna's story. According to Goodreads, it's the best rated out of the four books so going in, I was hopeful. I really liked Alanna: The First Adventure, but I felt like the subsequent books, In the Hand of the Goddess and The Woman Who Rides Like a Man never fully lived up to the magic of the first book. Nonetheless this is one of those classic fantasy series that I knew I needed to have under my belt, both for of it's feminist penchant and also because it clearly paved to way for a lot of modern fantasy stories we've all read and loved - especially the ones featuring a girl-posing-as-a-boy. I'm happy to have seen the series to it's conclusion, but I did have some issues here...which we'll get to in a moment.

Lioness Rampant once again finds our grown-up heroine-turned-knight out searching for adventure and being her usual heroic self. This time, there's a quest for a long lost, powerful magical artifact - which naturally means some powerful, other-worldly opponent to face. There's also new characters thrown into the mix, another a potential new romance to ship (or not) and finally, Alanna begins to make the journey home, after years of exploring, because all is not well in Tortall. Old threats have come to the forefront again, bringing the series full circle from where it started. As much as I understood Alanna's need for adventure, and as a reader it's always exciting to explore new magical realms, I was eager for her to go back home, given the hints at the end of the previous book that something dangerously wrong in Tortall.

The final chapter of Alanna's adventure as a knight was the longest of the four books, and either because of that, or despite that, the pacing seemed off in quite a few places. Some parts were unnecessarily long, like the focus on the new romance for example, but when we hit the climax, it seemed underdeveloped and rushed. In general the story just didn't flow as smoothly as it should have. The longer parts wouldn't have bothered me if the ending would have been given the same attention but it just came across as too sudden for my liking. The tension between Alanna and the main baddie, had a much weaker impact than it should have, and their final confrontation was over almost before it began. It definitely fell flat compared to what we've been shown that Alanna is capable of. Despite that though, there were some wonderful sword-fights and battle scenes, which were as thrilling as they've always been - those are certainly a selling point of the series.

As far is the romance goes, well I mentioned another ship added to the mix. I'm all for how the book is progressive with regards to women, and their romances obviously, but this new romance was all over the place. It seemed unnecessary, to me at least and the outcome seemed obvious so I'm not sure what the point was. In the end, things ended up going the way I'd hoped for everyone so I can't complain too much, but I'm still not sure what the the purpose was. Despite the hit-and-miss romances, Alanna is most certainly a feminist icon. She does what she wants, pure and simple. Her role as a pioneer is made clear in Lioness Rampant: she truly changes her world for the better by being an example to women all across the lands. Her impact is made more clear here in the conclusion, but it's not just the women that benefit from Alanna's example - the men are changed as well, as they learn to see women as not only capable warriors in their own right, but as equals. That to me is the most important aspect of this series, and what makes these books so important. Once again I find myself wishing that I'd read these as a young girl, when they were coming out because I know their impact on a teenaged me would have been all the more pronounced.

Before I wrap things up though, I have to mention: FAITHFUL!! I won't say more here but to those who've read this: CAN WE TALK ABOUT FAITHFUL PLEASE?

Lioness Rampant is a satisfying end to Alanna's adventure, despite some minor issues. I listened to the entire series on audio and they made for a quick and engaging story. I'll most certainly be going on with the rest of the stories set in the Tortall Universe. Classic fantasy readers looking for shorter stories filled with knights, magic and feminist themes should absolutely give this series a chance!