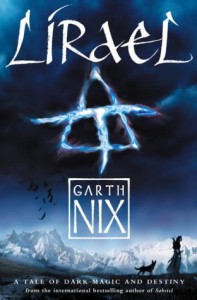 Lirael is the sequel to Sabriel, which I read for the very first time this year and it instantly became one of my all-time favorite books. I was a bit hesitant to start with Lirael though, after I found out that there would be a different main character. I adore Sabriel fiercely, so I wanted to spend more time with her on new adventures. I was worried that Lirael couldn't possibly live up to Sabriel as well; I'm always weary when a series switches up the protagonist this way. It turns out though that I needn't have worried at all. As with Sabriel, Garth Nix weaves an impressive high fantasy adventure that is richly atmospheric, overflowing with darkness, intensity and fantastic new characters to boot!

Lirael starts off by introducing us to our titular character, aged 14 residing with The Clayr, a collection of people from one of the five magical bloodlines, who possess The Sight. Lirael grew up with The Clayr, but she never really fit in. Where the Daughters of the Clayr are blond, tan and possess the gift of foresight, Lirael is pale with black hair and Sightless. The mystery of why The Sight alludes her takes up the better part of the book, but fans of Sabriel should see some subtle hints early on as to her true calling. To distract her from obsessing about her lack of apparent magical abilities, the head of The Clayr suggest she take up a job. Lirael suggests working in The Great Library, largely because of the privacy it offers - as a loner and an outsider, she feels at home amongst the impressive collection of books. I like this girl already! The Great Library doesn't simply house books though: there are forbidden magical objects, dangerous artifacts, enchanted weapons...and a fair share of terrible free-magic creatures to be found. It's basically equal parts library and adventure. I loved every second that Lirael spent there and, as you can imagine, it isn't long until our girl gets into all sorts of trouble ;)

Lirael is divided up into three parts, and the second part flashes forward about four years and reintroduces us to Lirael, now 18 and, still Sightless. It isn't long though until she finds a secret passageway, seemingly meant just for her. Once she follows the path, her true calling becomes a bit clearer. Soon after, she gets sent on a special quest. Eeep! Part two is also where we meet our other protagonist, Sameth, who happens to have some rather famous parents, which ties him into the previous book nicely. Finally, part three largely consists of our two protagonists finally meeting and joining forces.

Character-wise, Lirael has a lot going for it. It's a relatively small cast, but they all shine in their own way. Lirael was quite different from Sabriel, but she struck me as having certain compatible traits with my favorite heroine. I quickly grew to love Lirael almost as much as I did Sabriel. Lirael for her part, is the definition of an introvert. She prefers to be by herself, even though she's terribly lonely at times but she soon makes a friend for herself in the form of a magical, talking dog, appropriately named: The Disreputable Dog. I adored their back and forth and how loyal and helpful that the dog was for Lirael. Considering that my beloved Mogget is largely absent for the better half of the book, the Dog filled the void nicely because she's just as mysterious and powerful as Mogget. Of course, I was thrilled when Mogget finally showed up, meeting with Sameth almost as soon as the boy sets off. Speaking of Sam, for his part, he caught my interest straight away. When we meet him, he displays impressive heroics, that end up costing him dearly throughout the rest of the book. I felt for him. He was quite compelling in his own right, but I admit that I still preferred Lirael's chapters to his...possibly because her character felt more relatable to me.

Where Garth Nix's writing especially shines though, is in his world-building and his skill at setting a dark and delicious tone. As with Sabriel, we're dealing with Necromancy as well as Magic, both Charter Magic and Free Magic. There are magical items, and the magic itself can be conjured by sound (like bells, pipes or whistling) and by marks, called Charter-marks. The Abhorsen is charged with sending the dead back into Death, but there are evil Necromancers, hell-bent on bring back the dead and forcing them to serve, to hunt, to spy and to kill for their cause. The usage of Necromancy and 'living-dead' is already eerie enough, but Nix's way with words makes you feel like the danger is ever present, constantly lurking around every corner. Once again, I was blown away by how the story is so completely immersive, I felt totally submerged in this world, no matter what else might have been on my mind when I started reading. I have nothing but praise for this series!

On a final note, I listened to Lirael on audio and just like Sabriel it was narrated by the incomparable Tim Curry. I don't know if it's because he's an actor but his narration is a performance through and through and it works incredibly well with the material at hand. Audiobook and fantasy fans should listen to this series based on his performance alone! Honestly, I feel like there is not enough words in the world to express the love I have for this series. Highly recommended for fans of dark and detailed high-fantasy!